Some creepy unexplained footage of a ‘ghost’ has been shared on the internet and people are freaking out at the paranormal activity. While schools often have occurrences which no one wants to take the blame for, the culprit behind the mess made in this video really is a mystery.

The CCTV footage was taken at a school in Ireland, Deerpark CBS, and shows lockers shaking, books flying across the corridor, and the complete destruction of a wet floor sign.

Maybe the ghost died on a slippery floor and wanted to get its revenge?Take a look here:

Deerpark CBS was founded in 1828, and is the oldest school in southside Cork. Could the visitor be an ex-pupil coming back to take a look around?

The video was taken at 3am, so the disturbances couldn’t have been caused by mischievous kids. As far as the principal of the school knows, the video is real.

The activity begins with a door at the end of the corridor opening and slamming shut with a bang. Seconds later, a whole set of lockers can be seen shaking violently, almost to the point of falling over.

Inexplicably, a single locker then flies open, with its contents spilling out onto the floor. 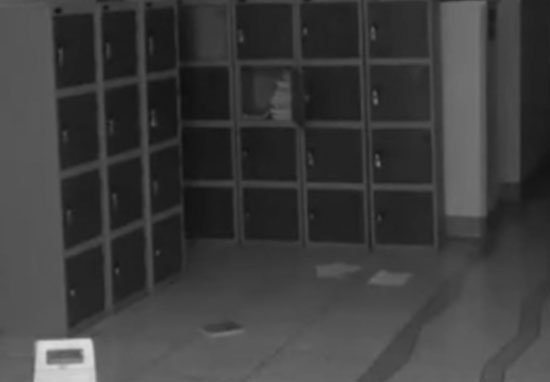 To top off the terrifying scene, the wet floor sign slams aggressively to the ground, as though it’s been kicked.